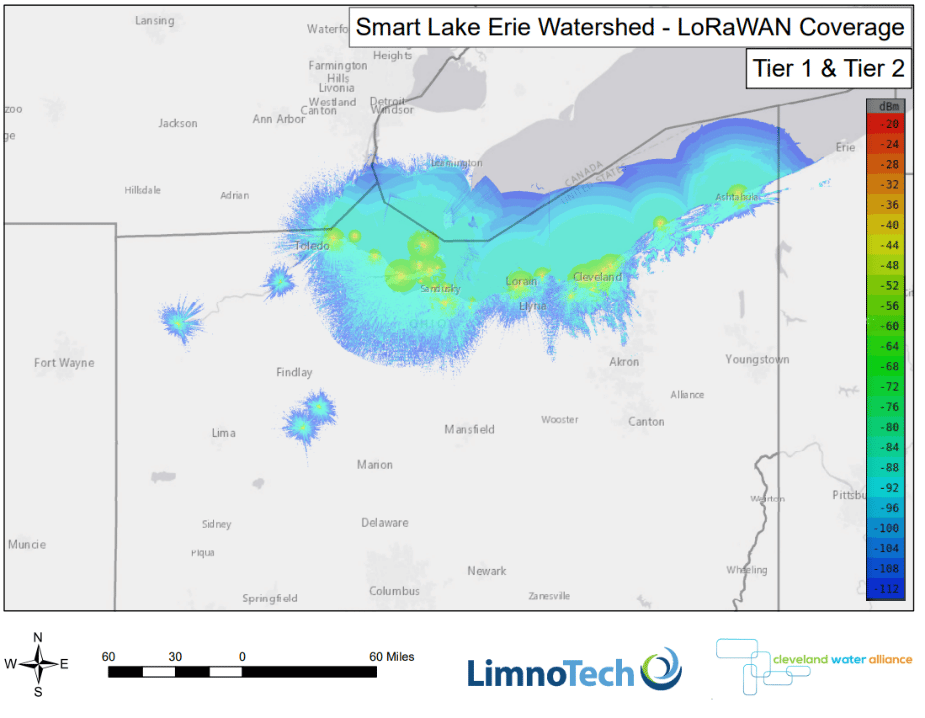 A regional telecommunications project led by Cleveland Water Alliance (CWA) kicked off this month – a first of its kind in the Great Lakes region, the specialized wireless network will extend connectivity across area wetlands, parks, coastlines, rural and urban areas, and the open waters of Lake Erie.

CLEVELAND, Ohio – a regional telecommunications project led by Cleveland Water Alliance (CWA) kicked off this month with the installation of several high-tech radios on towers, building rooftops, and even on the mast of a retired Great Lakes freighter. A first of its kind in the Great Lakes region, the specialized wireless network will extend connectivity across area wetlands, parks, coastlines, rural and urban areas, and the open waters of Lake Erie. The effort is part of a broader rollout of CWA’s Smart Lake Erie Watershed initiative, a state and federally funded program to increase the region’s ability to monitor and manage area waterways and provide opportunities for area businesses, cities, and universities to accelerate water technology development.

Gateway radios were installed this month at the University of Toledo’s Lake Erie Center, on several buildings on Case Western Reserve University’s Cleveland Campus, on the William Mather ship docked at the Great Lakes Science Center, and atop the Anthony J. Celebrezze Federal Building in downtown Cleveland. Additional gateways are planned along the Ohio shoreline and other key inland and urban areas across Northern Ohio. Each gateway site has the capability to communicate and receive data from tens of thousands of remotely deployed sensors within its listening area, which can be located up to 20 to 30 miles away over open water. Environmental and other data received by each gateway is then relayed to the internet and on to cloud-connected servers and data dashboards. The network utilizes a new telecommunications standard called LoRaWAN (Long Range Wide Area Network) that is specifically designed for a new generation of low-cost and low-power devices that are becoming ubiquitous in smart home and smart city applications. Water-focused uses of the network include deployments of swarms of sensors to track toxic algal blooms, chemical spills, urban flooding, and other applications that require dozens to hundreds of sensors to track. 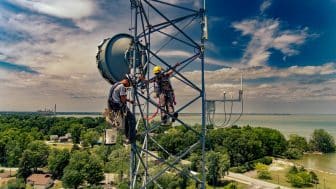 Bryan Stubbs, President and Executive Director of Cleveland Water Alliance, sees this new network as an exciting leap forward for the region. “We intend to operate the network like a public utility and share its combined coverage with those who study, manage, and protect our water systems, including water utilities, university researchers, and many others throughout northern Ohio,” said Stubbs. “We’re excited about the opportunities this expansion presents for enabling new deployments through our Water Accelerator Testbeds as well as amplifying data sharing opportunities across the region as we establish Lake Erie as the most digitally-connected freshwater body in the world.”

The first uses of the new network include transmitting data from specialized buoys that monitor water conditions offshore for the City of Cleveland Water Department near its water intakes. Ed Verhamme, Principal Engineer at LimnoTech and President of Freeboard Technology, the Ohio-based company responsible for maintaining portions of the network and several offshore buoys, says the availability of this new coverage is enabling organizations to rethink how they plan and pay for environmental monitoring. “Every organization we’ve approached about this new network and its capabilities is interested in testing new sensors and creating new monitoring approaches that are not limited by the current cost of sensors and expensive cellular communication plans.” Verhamme said initial tests are exceeding expectations for coverage, and tower and building owners are excited to host the low-power, low-cost gateways so they can also start to utilize the network for their own organizations. “We’ve had some data packets make their way from sensors deployed in Sandusky Bay clear across Lake Erie to the gateway deployed in downtown Cleveland. Our testing so far shows that we can get regular connections to our buoys 17 miles from shore, which previously had zero cellular coverage.”

Additional testing will be performed on the network this summer in partnership with Case Western Reserve University’s Institute for Smart, Secure, and Connected Systems (ISSACS) Professional Services Group. Chris Nurre, Director of the ISSACS Professional Services Group, has been searching for ways to scale these types of technologies for several years. “We’re hoping to perform realistic testing of this and similar networks in the region over the next few months to understand reliability, signal strengths, and how to optimize remote deployed devices to conserve battery and extend its utility.”

Organizations that are interested in either hosting a gateway to help expand coverage or want to learn more about how to sign up to use the network are encouraged to reach out to Cleveland Water Alliance at info@clewa.org.

ABOUT CLEVELAND WATER ALLIANCE
Cleveland Water Alliance (CWA) is a non-profit organization that seeks to better utilize the economic and job-creating potential of Lake Erie while also urging greater care of the valuable natural asset. Established in 2014, CWA serves a mission to build upon Ohio and the Great Lakes’ assets and resources to create a clean water innovation ecosystem that harnesses technology, spurs the economy, enhances education, and drives research. As a collaboration of private and public sector leaders, CWA is spearheading a critical effort to broaden the way Northeast Ohio values, manages, and capitalizes on its precious supply of freshwater.

@hraadvisors @Utile_Design @Huitt_Zollars @AsakuraRobinson @HoustonTX Exciting news for Buffalo Bayou Park! We are honored to be a part of this fantastic team and grateful for the opportunity to work with so many dedicated and talented people.

Come Work With Us! LimnoTech is seeking environmental scientists, engineers, software developers, and modelers with a passion for the #environment. Locations vary across our MI, CA, MN, and DC offices. Details at: bit.ly/limno_jobs Please help spread the word! 💧 pic.twitter.com/OnA5…

“ …nature has shown its resiliency for millions of years. “Why not take those lessons learned?” – Paul Freedman (LimnoTech) See @theNASEM workshop proceedings on the “Benefits, Applications, and Opportunities of Natural Infrastructure.” bit.ly/NASEM-niw

We are excited to sponsor this year’s @WildernessIn #MNGreatRiverRace! The event raises support for outdoor education programs that seek to close the opportunity gap and immerse youth in opportunities to learn, explore, and thrive in the outdoors. bit.ly/22-WI pic.twitter.com/y51e…